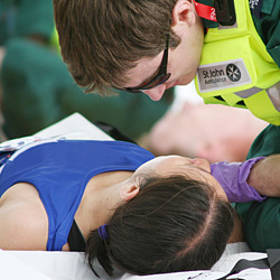 With the help of 1,200 St John Ambulance volunteers, thousands of runners suffering from minor injuries and medical problems were able to cross the finish line at the Virgin Money London Marathon on 13 April. St John Ambulance first aiders worked alongside the Virgin Money London Marathon medical team and the London Ambulance Service and dealt with everything from blisters and sprains to more serious conditions such as exercise induced collapse. The team of first aiders, doctors, nurses and paramedics provided cover for 45 ambulances and 52 first aid posts. There were 36 cycle responders along the race route this year making it the biggest ever Cycle Response Unit deployment.

This year’s runners included nearly 200 supporters of St John Ambulance who are aiming to raise around £300,000 by the time all sponsorship money has been collected.

Tragically, a 42-year-old man died after collapsing at the end of the London Marathon this year. Despite the immediate medical attention provided to the casualty, his death was confirmed on arrival at hospital. “Our volunteers still have every reason to be proud of rising to the challenge of our biggest first aid effort of the year”, SJA’s London Events Manager Katherine Eaton said after expressing her sincere condolences to the family and friends.

This website uses cookies to improve your experience while you navigate through the website. Out of these, the cookies that are categorized as necessary are stored on your browser as they are essential for the working of basic functionalities of the website. We also use third-party cookies that help us analyze and understand how you use this website. These cookies will be stored in your browser only with your consent. You also have the option to opt-out of these cookies. But opting out of some of these cookies may affect your browsing experience.
Necessary Always Enabled

Performance cookies are used to understand and analyze the key performance indexes of the website which helps in delivering a better user experience for the visitors.

Analytical cookies are used to understand how visitors interact with the website. These cookies help provide information on metrics the number of visitors, bounce rate, traffic source, etc.

Advertisement cookies are used to provide visitors with relevant ads and marketing campaigns. These cookies track visitors across websites and collect information to provide customized ads.

Other uncategorized cookies are those that are being analyzed and have not been classified into a category as yet.