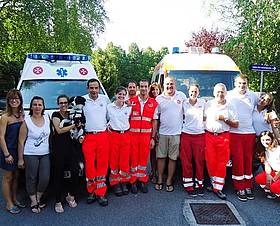 At the famous singing birds’ festival in Sacile, Italy, in mid August, volunteers from St John Hungary assisted the local St John volunteers in providing first aid to the thousands of visitors. The Italian-Hungarian exchange was part of the JOIN Volunteer Swap.

The festival of the singing birds is a renowned annual traditional event in Sacile. Food and drink stalls, a dogs’ show and other attractions provide the supporting programme for the highlight, a real singing contest between different birds (tufts, goldfinches, nightingales etc) that takes place in the early morning at 4am. A jury of experts is present to listen to the singing and award prizes to the winners. This year’s festival was the 740th. As in the last years, the local SOGIT branch had a leading role in providing first aid.

The local branch of the St John association in Italy, Soccorso dell’Ordine di San Giovanni Italia (SOGIT), was present at the event with three ambulances in strategic points of the town. In addition, several patrols made up of two volunteers each and equipped with emergency backpacks were present among the crowd to step in case their assistance was required.

This year SOGIT Sacile could count on the help of four volunteers from the Hungarian St John association Johannita Segitö Szolgálat. They were hosted in Sacile within the framework of the international project “Volunteer swap”. During their stay they were part of the teams rendering first aid and also participated in cultural and festive events, in cooperation with the community association Pro Sacile which provided for the logistic support.

Last year SOGIT Sacile hosted the Austrian volunteers whose close friendship was  strengthened by the visit of local Sacile SOGIT volunteers to Vienna in October 2012. Being part of the international organization of the “Giovanniti” is of paramount importance to SOGIT as it shows how much St John goes beyond local boundaries and highlights how much JOIN organisations share a common identity.