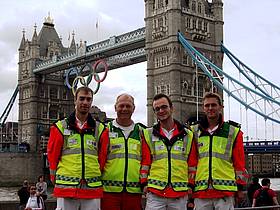 At the Olympic Summer Games from 27 July until 12 August in London not only the athletes gave everything. St John Ambulance from England (SJA) was responsible for providing medical services to the visitors. In this very special assignment for the SJA London District, they were able to count on assistance from Europe and overseas, amongst other from the JOIN members Austria and Germany. Together with their English colleagues, 35 St John volunteers from Australia (6), Canada (12), Austria (16) and Germany (1) provided first aid at each of the ten Olympic running competitions including the Marathon and the Triathlon as well as at public viewing events where the Games were shown on large screens. There, St John volunteers operated three medical stations from early in the morning until midnight and held emergency vehicles on standby.

Thanks to the professional preparation in both the London office and national headquarters, the guests from both the continent and overseas could start working right away. Although the helpers from the five countries came from different backgrounds in terms of medical services and rescue systems, cooperation ran smoothly from the beginning.

Reinhard Beyer, the only volunteer from Germany, commented: “At the end the many long shifts – often twelve hours in a row – had really exhausted us. However, the joy of working together for a joint cause was more than worth it. The feeling to be a member of such a large family in which common roots, values and goals facilitate an immediate mutual understanding is a great experience! It should be made possible to as many members as possible.” To read a full account of his experience, follow this link.

After the European Football Championship 2008 in Austria and Switzerland, the Olympic Games in London was the second large sports event where different JOIN members and volunteers cooperated in providing medical services to the public. Given that all participants agreed on the wide success of the joint initiative, it was most surely not the last event.